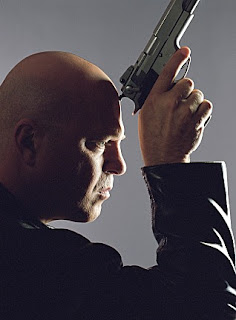 This post is dedicated to my agent, Glenn, who love The Shield and always points to it as an example of a great television pilot. And I agree.

I’m all about first acts these days, so most of my comments will be about the first act structure and scene construction. (Which leads to a fair amount of character talk).

You could argue that the murder that takes place at the end of the episode is an inciting incident for what follows and therefore this is a premise pilot. But that would be stretching it. The series isn’t heavily arced and although Terry’s murder does play later in the season, it’s not a huge storyline. I’d guess that Creator/Writer Shawn Ryan put the murder in more to show us what Vic Mackey is made of than to set up the rest of the series.

Shawn Ryan, btw, teamed up with David Mamet to give us The Unit. And he has a hand in the Women’s Murder Club one of the new fall series (but from what I’ve seen, it’s not too strong a hand).

The tease of this pilot is great. It sets up the entire series premise by intercutting between two storylines and includes good measures of both comedy and action.

On the one hand, we’ve got Captain David Aceveda addressing the press and telling them how community policing is the right way to clean up his ‘hood. On the other hand we’ve got Vic Mackey and his Strike Team chasing down a perp. (A story)

By the end of the teaser, we’ve had a picture painted for us of two men very much at odds over how policing methods. One is straight and narrow, law and order, by the book but with a taste for the press and a certain ambition. The other is a ruthless, lawless man of action, with a sense of humour, a sense of well-being and a sense of invulnerability. A clash between these two men seems inevitable.

The first act is made up of six sequences.

The first finds Claudette and Dutch at a murder scene and ends when they realize that the victim’s young daughter is missing. (B-story)

The second sequence features a confrontation between the Captain and Vic over allegations that Mackey attacked a suspect with a pair of pliers. Mackey seems to come out on top. (A-story)

In the third sequence we return to Dutch and Claudette. They banter about personal matters before reporting to the Captain about the case and their next steps. (B-story)

The fourth is a Danny sequence. Dutch follows her into the kitchen and tries to arrange a date with her, but Vic comes in and teases Dutch till he leaves. Then Mackey hits on Danny and their on-going relationship is revealed. This sequence sets up the antagonism between Vic and Dutch and also the Dutch-Danny-Vic triangle. (C-story)

Next comes a short sequence of Terry watching Vic for the car. We know that Terry is an outsider and not privy to Vic’s real business. (A-story)

And then to the park, for the final sequence of the act which gives us a nice end of act turn. The Captain enlists Terry’s help in an undercover operation to bring down Mackey. Terry agrees for a price, but also suggests that the Captain’s motives aren’t pure. He knows that Aceveda is planning to use this for political gain. (A-story)

By the end of the act, there are a lot of balls in the air. The feud between Mackey and Aceveda is well established and the one between Mackey and Dutch is taking off. We’re a few beats into the murder-kidnapping case and Claudette’s irritation with Dutch’s style is starting to show. Finally we know that Dutch has a crush on Danny and that will be complicated by her on-again off-again relationship with Vic.

There’s a lot of character development throughout this act. To understand it better let’s take a closer look at the two sequences in the Dutch-Claudette murder-kidnapping storyline. 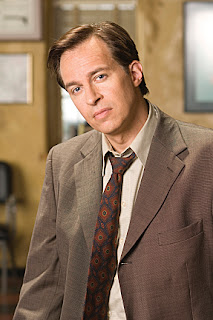 of my favourite characters in The Shield. He’s so repulsive in this episode but at the same time, you kind of feel for the guy because he’s inept and wants badly to be good at his job and liked by people. He comes out of the box with a big personality, commenting on the murder victim’s “rack”, spouting FBI profiler mumbo-jumbo and setting his sites on Danny.

By contrast, Claudette is much lower key, but full of character nonetheless.

The first sequence is made up of four scenes: Dutch and Claudette at the murder scene. Dutch is commenting on the naked victim. Interestingly there is almost no police work done or mentioned in the scene.

In the second beat, Dutch follows Danny outside and does what for Dutch qualifies as flirting. In doing so, he gives us some information about the crime, but dressed up as big shot FBI profiler talk.

In the third scene, Dutch meets the sister of the murder victim. She falls on her knees in grief before him and the assorted cops watching snicker because she’s in blow job position. But Dutch — who moments ago was talking about a dead woman’s breasts — is humanized in this moment because he doesn’t know how to react. He’s embarrassed and upset for this woman and he doesn’t like what the other cops are thinking. It’s a very intense emotional beat.

And then comes a great turn that flips Dutch and us-as-viewers into a new emotional space: we learn that the victim has a daughter. In the fourth scene of this sequence, Dutch reports the news to Claudette, who has already figured this out because she’s holding the daughter’s photo. Now the question is, where is the little girl? With the killer?

The second Dutch-Claudette sequence starts with a line from Claudette which I love as a scene starter:

I stopped listening to you five minutes ago.

She and Dutch are at a hot dog stand and he’s still talking his profiler-speak which is annoying Claudette.

In the second beat, they head inside passing Danny and Dutch’s potential relationship with her becomes the subjec 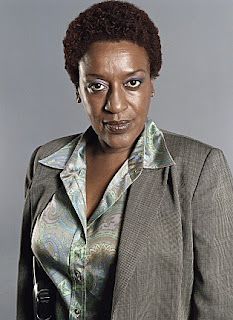 t of the conversation.

When they get inside the squad room, Captain Aceveda turns up and they give him a report on the crime. They give us the following new information about the crime: the father of the missing girl is a crackhead and Dutch thinks he’s the killer and kidnapper and a known criminal visited the victim yesterday.

The pilot episode of The Shield is meditation on character. The pilot and first act show us how Ryan manages to keep the thread of the criminal investigation alive with a minimal screen time. His supersizing of character development is what hooks us into the series in these early moments.