Tomorrow I head to Ottawa to take part in the Canadian Film and Television Producers Association’s Prime Time Conference.  I will be part of the panel scheduled for Friday morning 11am  — 12:15 pm in the Confederation III room on the Future of Storytelling. 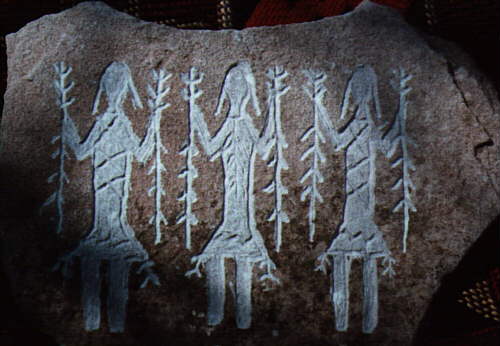 Now I have to think of something to say on the subject.  Here are some of my thoughts so far:

1. There will be a future of storytelling

Humans have always told stories and have always used every media available to them.  From cave walls and the ballads of the wandering minstrels through dance, film, graphic novels and for me, most recently, Twitter, people like to tell stories and they like to consume them.  The digital media are new palettes for our tales and there’s lots of cool new forms of story emerging.  But like any new medium it may take audiences a while to become literate.

The media literacy of our audiences is important to how we tell them our stories.  When I first began working on Sesame Street in the 80s, the research told us that kids weren’t literate enough in the language of film to follow plots and sub-plots.  Remembering and following the arc’ed story that ran through the “street” segments was a hurdle for the youngest viewers.  We were mindful of cutting techniques and worked hard to simplify our storytelling.  Then along came Teletubbies and for the first time in history, we started plunking our kids in front of the tv at 12 months.  By the time that generation of kids hit Sesame Street age — three to six — they were so tv literate that they could watch entire Disney movies and relate back not just the plot but all the subplots as well.  That first Teletubby generation is, btw, now 12 and 13 years old and they are consuming their entertainment on YouTube.  Their level of media literacy must be quite awesome.

In terms of the future of storytelling, I think we can safely create new forms of narrative in a variety of media for that generation and expect them to follow.  We can also expect many audiences to become more literate over time, but we can also expect resistance from many audience segments.

Working in television story department, the audience is like a distant dream.  Your real audiences are the other members of the story team, the network, producers, cast and crew.  They’re the first consumers of your stories and the ones who talk to you about them or give you notes.  You end up tailoring the story to them.  By the time your show airs, you’re probably on another project or at least the next season of this one.

On the web, you are present with the audience when they consume your story.  They can give you their thoughts immediately.  The relationship is much more intimate.

You aren’t guided by demographics and focus testing in the digital space.  There are individuals who leave comments, who rate things, who communicate with you directly.  You can get to know them too.  You can click through to their blogs and find them on Facebook and look at pictures of their cat.  It’s an incredible thing to know your audience that well.

Since you don’t have the usual gatekeepers — the networks, the funding agencies, distributors — it’s the audience who become your closest collaborators.  It’s their thoughts on the story that help you shape what you’re doing.

You have the option of tapping into that closeness of the audience and inviting them into the story in new ways.  I love to create stories in which the audience can develop relationships with the characters, talk to them, guide their actions or fight with them.  I’ve certainly seen a lust for that among the people who participate in the story experiences that I’ve created.  They love communicating with the characters, questioning their actions, suggesting ways to handle their problems or just playing Scrabbulous with them.

I’ve started looking for ways to let the audience influence the plot.  So in Crushing It, our characters turned to the audience for advice about many things:

We didn’t predetermine how Crushing It would end.  We had two people who were supposed to get married, but we let the audience determine whether that wedding took place or not.

I think as we get better at telling stories in the digital space, we’ll become better and better at creating stories that audiences can help shape.

5. My Future in Storytelling

I can’t say what anyone else’s future of storytelling is, but I know what I would most like to do next.  I want to create richer, deeper and more engaging story experiences for audiences by building big story universes using a wide variety of media to do what each medium does best.  Film, tv and novels are great ways to hook an audience and shape a world.  Through comics, games, graphic novels and web series we can explore the past and future of these worlds, flesh out the stories of different characters, drill deeper into the mythology and philosophy.  Transmedia storytelling is the new wave we’re seeing on projects like Heroes, Lost, Avatar, Sherlocke Holmes.  It allows avid fans to enjoy and explore the story they love really deeply and in many ways.  But many platforms are built to be self-standing and enjoyed on their own.

Both as a story consumer and a storyteller, transmedia is what intrigues me most now and where my attention will be in the near future.