What I like about Journeyman is the way writer creator, Kevin Falls — a veteran of Sports Night and West Wing, rolls out the premise, a little at a time. He doesn’t feel the need to spell out the story for you. He lets you come and get it. And in doing so, he keeps you wondering and engaged throughout the pilot. 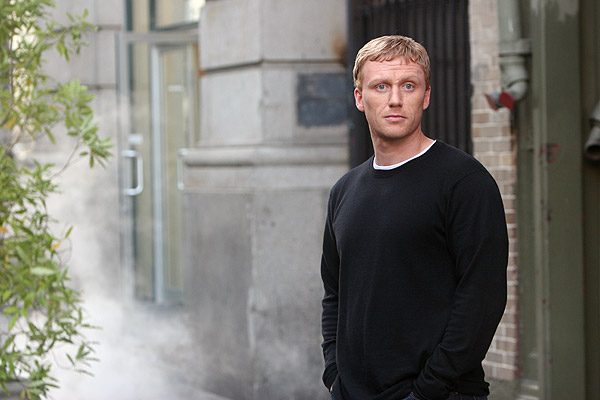 I have tried very hard not to read anything about any of the new season pilots so I could approach my first viewing with fresh eyes. Not only did I have no idea what the premise was for Journeyman, I hadn’t even heard of the show. From the beginning, I was intrigued and I remained in this state of intrigue throughout; wanting to know what was going on, what would happen next. I think that’s a pretty good state for a pilot to throw you into.

Journeyman is a sci fi hour long series. It opened with a longish tease, followed by four acts and a tag.

The teaser has 5 sequences and is longish at about 8 minutes. It has the hardest, most cliff-hanger-y curtain of any act.

Following the titles, Act One has five sequences and runs another 7 minutes.

Act Two has three sequences and runs just over 8 minutes.

Act Three has three sequences and runs about 7 minutes. At 27:27, we get this bit of dialogue:

LIVIA: Stay on it. Go with your instincts.

DAN: What if I get it wrong?

LIVIA: You will. That’s part of it.

A third act statement of theme? Dan is going to have to live by his wits and make plenty of mistakes?

Act 4 is a mere 3 ¼ minutes and is made up of a single sequence yet very important sequence. It provides essential background information and moves the B-story forward.

Finally the tag is three sequences and runs for the final 61/2 minutes of show time.

Let’s look at how the show opens.

In the first scene, we meet Mr. Nice Guy, Dan Vassar. He carries his kid on his back and remembers his anniversary. It functions to do nothing more than make us like our man.

The second scene seems to have two function. First, to set up the rules of the show — that is that nothing is going to get spelled out for you. Second, the scene paints quite the opposite portrait of Dan.

We’re thrown into the middle of a discussion.

HUGH: Vasser! Where is it?

Where’s what? Who are these people? Figure it out, baby. This is the show and this is about to become Dan’s life. Look around, listen, try to make sense of what is going on. No one’s going to tell you. You’ll have to work it out yourself.

Then comes the second sequence. Dan is on familiar territory but something is wrong. It’s 1999 – 8 years ago. Then he sees Livia, hailing a cab.

Boom, back to NOW and Dan’s anniversary dinner with wife Katie. She comes on to him and he looks up at the TV the race results are being given.

DAN: A friend of mine had the winning horse.

KATIE: And a friend of mine had the loser?

Is Dan a gambler? Or was he one in the past? Is this one more thing to the list of Dan Vassar’s flaws?

But through the rest of this sequence, we can see that the marriage is good and Dan is a good father.

But come morning, his side of the bed is empty.

Dan wakes”where? Or better yet, when? A little teaser action sequence involving a baseball bat wielding man and then: 1987.

The tease is over, we’re eight minutes in and deep into the story. We’ve been in three time zones: Now (twice), 1999 and 1987. We’ve been told about Dan’s multiple flaws, although we haven’t seen them in action.

Because we travel with Dan on these bewilderingly adventures through time, we are in his shoes, seeing it through his perspective. We’re with him.

When the POV shifts to the frantic wife, Katie as she seeks help finding her missing husband from his cop-brother, we don’t share her concern. We’ve been privy to information that she hasn’t, information that removes the jeopardy. So the intervention and the speculation about Dan womanizing or the innuendos about gambling lack dramatic edge. The split perspective has already shown us that none of it is true. It’s hard to find an emotional hook in the plotline.

(In Chuck, there was also split focus. From early act one, we left Chuck to see what was up in the world of the spies. We knew they were a danger to Chuck and therefore the drama was heightened; we had more reason to worry about Chuck.)

Throughout the episode, what happens in the past is more compelling.

I like Kevin McKidd in the role of Dan very much, but I find the character not quite as well drawn as I would hope. Falls is walking a fine line here with Dan. One the one hand he refuses to spell out the character to you, just as he won’t spoon-feed you the story. And I like that.

But by the end of the episode I didn’t feel I really knew Dan and that makes me wonder how well Falls really knows him. I’ve mentioned the character beats in the tease which are almost contradictory. In the scenes that follow a lot of other characters talk about Dan. We learn that he has a sordid past, but not too much about it. His brother, wife and boss are wrong when they think that he’s gambling, womanizing, drinking or taking drugs, so it’s hard to take everything else that they say about him seriously.

We want to learn about who he is by how he acts; the choices he makes. And he does make two significant choices. He doesn’t sleep with Livia when he has the chance, because he’s thinking about his wife (we know this because he looks at his wedding ring). And he goes a long way to prove to his wife that he’s gone back in time. He even adds the romantic gesture of putting her wedding ring in the toolbox with the newspaper.

He saves a life here and there, but more by accident than design.

(The whole Neal/wife/kid things is morally murky. Dan saves Neal from committing suicide by throwing himself in front of a trolley, so Neal can father a child with a woman who doesn’t want to be a mother. Dan talks her out of an abortion. Then Neal comes back and wants to kill the wife and kid, but when Dan calls his name, he gets hit by a bus.)

We know he loves his son and he promises him that he’ll be there for the piano recital, but he doesn’t actually do anything that he knows will get him back on time. He does get back on time, but that’s just coincidence. Not character choice.

I want to see Dan’s character develop, deepen. If you’re going to be with a guy on such a strange journey, you want to be able to read him, know what he’s thinking and feeling.

And I am going to be on the Journeyman journey. The PVR’s set. I’m going to keep watching , because I find the premise so intriguing.