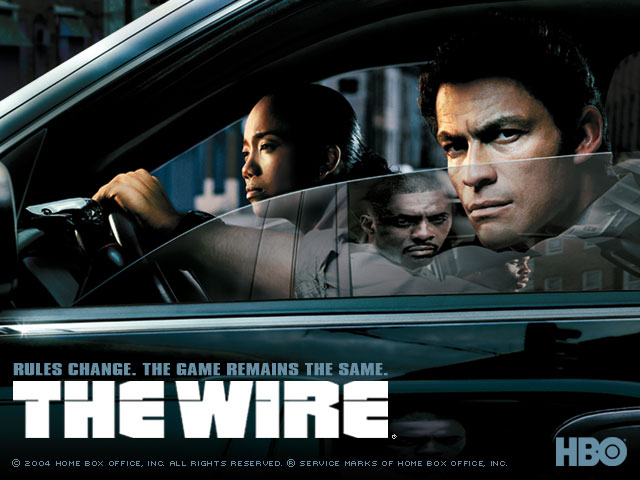 The New Yorker has a terrific article written by Margaret Talbot about The Wire which comes back for its fifth season in January. Here are a couple of excerpts:

“The Wire” débuted in June, 2002, looking more or less like a cop show. But the differences were important. It spent as much time with the lawbreakers as it did with the law enforcers. And you didn’t see the suspects through the cops’ eyes only—you saw them through their own as well. The drug trade emerged as its own intricate bureaucracy, a hierarchy that subtly mirrored that of the police department. Moreover, “The Wire” did not rely on the jumpy handheld-camera shots and the blurry “swish pans” that a lot of network cop shows had adopted. The camera remained locked, for minutes at a time, on people talking. And the story unfolded at a slower pace, too, which meant that many of the scenes elaborated on the characters and the power structures they moved within, rather than lay the pipe of plot.

Simon delivered the pilot to HBO in November, 2001. Soon after, he met the novelist George Pelecanos at the funeral of a mutual friend. ”. As Pelecanos recalls it, Simon told him that “The Wire” would be “a novel for television”. Each episode would be like a chapter in a book. You could digress, in the way a novel does. And it would be about the social aspects of crime.”

In Simon’s view, “The Wire” was never “a cop show. We were always planning to move further and further out, to build a whole city.”

Simon makes it clear that the show’s ambitions were grand. “ ”˜The Wire’ is dissent,” he says. “It is perhaps the only storytelling on television that overtly suggests that our political and economic and social constructs are no longer viable, that our leadership has failed us relentlessly, and that no, we are not going to be all right.” He also likes to say that “The Wire” is a story about the “decline of the American empire.”

Some of the dialogue from the fifth season is taken word for word from the Sun’s newsroom. Simon recalled, “There was this writer, Carl, who every day would eat the same thing for lunch: cottage cheese. One day, somebody walked by and saw him staring down into his cottage cheese, poking it with a spoon and saying to himself, ”˜Fuck, fuck, fuckity fuck.’ That’s in there.”

Because Simon and his primary writing partner, Ed Burns—a former Baltimore homicide detective who was once one of Simon’s sources—are both middle-aged white men, people tend to assume that the dialogue spoken by the drug dealers and ghetto kids is ad-libbed by the black actors on the show. In fact, one of the show’s writers was always present on the set, keeping the actors on script. A single dropped word was noted and corrected.

There’s much more. Go read it.