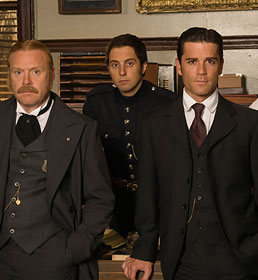 Murdoch Mysteries, which premiered in Toronto last night and around the country on other nights this week, knows just what kind of a show it is and shares that information with us right up front in the teaser.

The opening episode “Power” written by RB Carney, is a typisode; just an ordinary episode of the series with no setup elements. But we don’t need them to understand exactly what this series is.

The first shot is of a man is juggling lightning bolts. A carnival atmosphere surrounds him. Smoke and flares wow the crowd in their hats, ties and long dresses. We know immediately we’re in for some light-hearted entertainment. Leave your cynicism back in the year 2008. Murdoch Mysteries is gentle, old fashioned series in which the era (late 1800s) is a pervasive and satisfying story element.

The opening has a great lick in which we are led to believe that a dog is about to be killed. The lovely wide-eyed Edna pleads with police officer George Crabtree to help her save the dog’s life. Alas, George’s hands are tied and the dog is lead onto stage where the demonstration of alternating current is designed to electrocute the poor beast.

The stakes are a dog’s life. He’s going to be killed before our very eyes. It is very compelling; you can’t help but move to the edge of your seat and worry.

And the switch is thrown. The dog is still alive! A moment of relief, until we notice that the beauty queen who threw the switch is writhing and twitching, unable to let go of the handle.

She is the one who has been electrocuted.

She is the one who has died as we watched.

The story has already given us two sharp turns and we’re not even out of the teaser. We have also already been introduced to all the major players in the episode as well as Nikola Tesla, the Serbian electrical engineer who demonstrated wireless communication way back in 1893.

The teaser immerses us in the story elements that make the show: science, mystery, romance and the peculiarities of life at the turn of the last century.

In terms of the mystery element, there is no greater master of the art of creating the mystery than Murdoch showrunner Cal Coons who has fashioned dozens and dozens of television mystery plots in his day. The series is styled in the tradition of Agatha Christie, offering up a whodunit that we can try to solve along with Murdoch. If Murdoch falters in his investigation it is only because the writers are giving us a chance to catch up.

An old fashioned solve-along murder mystery always offers up the suspects early and so does Murdoch. In this first episode, there are three possible murderers. We meet all of them in the tease. In the acts that follow, suspicion falls on one after the other as new evidence comes to light. We can play along, guessing what each new piece of evidence means and developing our own theory of the crime. The mystery is very accessible and is written to invite us in, to play along and figure it out with Murdoch, who always shares his reasoning with us.

The science is cool and quirky. Science as a story element is in no way novel these days. CSI and mysteries of the a similar ilk have immersed us in cutting edge science. But Murdoch has it’s own unique take on science. It views it from a historical point of view. And the science at the turn of the last century is actually even cooler than it is now. Tesla was a man way before his time and his appearance in this first-to-air episode lets the science geeks among us know this show is for them.

But not just for them.Because the romantic story line that plays quite prominently in this episode draws a quite different crowd to the screen. There is a beautiful sequence when Edna opens her door to find George Crabtree standing there with a pot of violets. She rebuffs his advanced until he tells her that the flowers aren’t for her. They’re for her dog. He invites the dog for a walk and begs Edna to come along as chaperone. This charming and original scene is enough to hook any fan of the chick lit genre.

And there’s one more story element in Murdoch that’s sure to please. That’s the era. The setting, in the late 1800s, infuses every element of the story. It’s not just in the costumes. The plot itself revolves around the move from direct to alternating current; an event of the time period. The way the characters interact is rooted in the time. The series seems to be written with a wide-eyed optimism; a kind of turn-of-the-last-century cheerful confidence that anything is possible and everything will turn out well. Even the dialogue has been shaped to convey an old fashioned ness.

Seeing how communication and transportation are achieved back then is pretty fascinating. In the same way we’re wowed by cutting edge science and technology in a CSI, Murdoch’s 19th century methods are really intriguing, but also funny. We can’t help but laugh when we see Murdoch on his bike. We need to know how he will accomplish ordinary tasks without his cell phone. How is a romance conducted when the doors to a young lady’s boarding house are locked at 10 pm?

From a screenwriting point of view, I suspect the era is a real challenge and a lot of fun to work with. Murdoch certainly makes it fun to watch.

Murdoch gives us a real wealth of story elements in an anthology format. Between the science, romance, mystery, history and humour we have every reason to go back to this show week after week.