Contributor Mike McPhaden had the chance to sit down with Mark Ellis and Stephanie Morgenstern:

Flashpoint, CTV’s new procedural about a tactical police unit handling Toronto’s most extreme incidents, hit the bull’s-eye with audiences this summer.  As the ratings continue to rise, CTV and U.S. broadcaster CBS announced plans to bring the show back for a second season. It’s great news for viewers and a good omen to TV makers north of the border, but nobody is celebrating as much as the show’s creators, Mark Ellis and Stephanie Morgenstern. 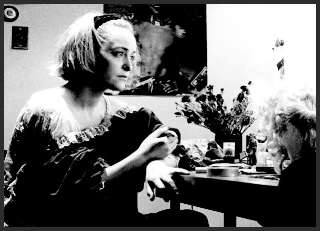 Prior to Flashpoint, they were best known as actors with a respectable list of behind-the-scenes credits as well. Morgenstern garnered a Genie nomination for co-directing her short film Curtains (along with brother Mark Morgenstern). A second Genie nom followed for her direction of Remembrance, a short co-written with Ellis.   The film, which Ellis & Morgenstern starred in, was well-received at TIFF and Telluride before going on to win a Jutra for best short film, and grabbing the best Canadian short nod at the Toronto Worldwide Short Film Festival.

Nothing to sneeze at, but it’s a long way from creating the first Canadian series on the US network dial in over a decade. So how did Flashpoint get its start, and what was its path to production? I spoke to Mark and Stephanie shortly after season one wrapped about the wild ride that is Flashpoint.

Let’s start with the obvious. Where did the idea come from?

ELLIS:  We were preparing for pitch meetings at TIFF for the feature film version of Remembrance, and our agents, Elina Levina and Lesley Harrison, happened to ask us what else was on our minds these days – were there any other stories brewing?

MORGENSTERN:  And the first thing that struck us was the shooting at Union Station, which had happened that morning.

ELLIS: We’d literally woken up, put CBC Radio on, heard there was a hostage situation unfolding at rush hour, started watching it unfold on live television, and then in twenty minutes it was all over and this police sniper had shot this guy” It was 9:30 in the morning and we started to think “What’s the rest of the day like for the guy that’s basically just had to become a public executioner?”

And this led Lesley Harrison to say, “This sounds like good territory for a movie of the week. How would you feel about pitching it to CTV?” And because of Remembrance, we were in the headspace of a film that’s about the emotional and human costs of war, so it dovetailed into the way that we’d already been thinking.  It seemed like really interesting territory.

Lesley Harrison called [then Senior VP of Dramatic Programming] Bill Mustos at CTV about it and he said they’d love to hear a pitch so we brought it to [then CTV Exec] Lesley Grant. She met with us about it over coffee and loved it, asked us to do a one-pager that went to Bill, and then some time later they green lit us to write a script through the Writer Only program.

Still as a TV movie at this point?

How long did you have to write that?

ELLIS: Hm. A fair amount of time — I think it was about six months.

MORGENSTERN: It felt pretty unrushed, compared to later on.

ELLIS:  I know, it’s crazy. Especially when I think back on how long we took on revisions of Remembrance.

At this point, had you ever written anything long-form?

ELLIS: Yeah, we had a Remembrance feature script.

Writing a TV movie is a pretty specific craft. How did you educate yourselves as to how to do it?

ELLIS: Watching a lot of them, analyzing the structure, talking to a couple of other writers we knew who had TV movies in development as well.

MORGENSTERN: We also had a lot of help from the story editor who worked with us, someone CTV frequently uses, and that’s John McAndrew.  He was a really good match. We’d worked with him before, and he helped us develop the original pilot script as well.

Did you have to submit an outline on the TV movie at some point in the process?

ELLIS: Yeah, it was more of a treatment, really — a fairly extensive, detailed document.

And how did you co-write, practically speaking? Did you literally sit at the computer together?

ELLIS: We break story together, usually on very long walks.  Then do a beat sheet together.  As we go to outline and draft, we’ll often divvy up acts or scenes, and then rewrite each other.

Do your strengths differ?  Is one of you the structure expert, and the other a dialogue genius?

ELLIS:  We both do both.  Structure is usually hammered out together.  We’re both pretty confident with dialogue and writing emotional scenes.  But we’ll sometimes split off the tactical business from home/family/character scenes, with me taking the first pass at the tactics and action.

So six months later, you submitted your draft of the pilot.  Then what?

ELLIS: We did two drafts, ultimately, on the script, and then there was a changeover in executives at CTV. Bill Mustos took a sabbatical, and Leslie Grant moved on as well. (Bill told us later on that he’d always been intrigued by the idea of it as a the series.) Ultimately, Karen Troubetzkoy became our executive. We had a meeting with her and she told us that she’d picked up the script and was really prepared not to like it because she’s not usually a big fan of the police genre, but she read it and it took her by surprise.

That’s around the time we met with Anne Marie La Traverse, and really liked her and clicked with her on a personal level. So she became involved as exec producer and was able to really help push the project and make it happen.

Anyway, Karen Troubetzkoy chose ours as one of the scripts to really champion along with Tecca Crosby, who was filling Bill’s spot by that point. The two of them were very vocal in supporting it and bringing it to the top of the pile for Ivan Fecan and Susanne Boyce, who decided it would make for an interesting series.

And did you agree?

MORGENSTERN: It was a pretty comfortable leap. We realized there was great potential for an ensemble story rather than just the story of a single sniper. And the sheer volume of cases that this team would be going on” the real Emergency Task Force goes out on two or three cases a day, so there’s no shortage of stories to tell.

Two or three a day?!

MORGENSTERN: Yes, they’re quite busy. So there was no reason why it couldn’t sustain itself as a series.

ELLIS: And by that point we’d been to the station, and hung out with the guys, seen the dynamic between them and the kinds of personalities that are involved, and could see it was a really rich area.

MORGENSTERN: It did mean a real shift of emphasis.  The TV movie spent a lot of time on Ed Lane’s family — his relation with his son and with his father — but we had to make room for the rest of the team.

So it wasn’t just a case of cutting pages.

ELLIS: No. Although originally we thought we might shoot the TV movie as a potential backdoor pilot, with the first one-hour episode in the series essentially being episode two, much like Intelligence did it. We wrote an episode two based on that assumption.

MORGENSTERN: The package that really sold the series was the MOW script, plus the script for the second episode, where we showed what we were going to replicate each week.

ELLIS: That second episode made it clear that these would be stories with heart, that the stories of the guest characters would be handled with sensitivity, that there was not going to be a black and white bad guy every week.

MORGENSTERN: And also making it clear that the main incident would carry through all four acts, rather than being resolved half way thru [as in the pilot.]

ELLIS:  And then in another meeting with Ivan and Susanne they decided that they wanted to take the movie script and pull it back to a one hour pilot script for the series.

And did that sample episode 2 actually make it into the series?

ELLIS: Elements of that episode made their way into the new condensed pilot. The introduction of the Sam character, which would have happened in episode 2, now happened in the one-hour pilot. And I think we had about ten days to do it.

ELLIS: It was a quick turnaround and you know what it’s like, it’s not as simple as “Oh, I’ll cut this bit and this bit and it’ll work out fine.” It was really challenging, but ultimately, that’s what they green lit. And we were in that small group of pilots that was shot last summer [2007].  And once the pilot was finished we got to work with Bill and Anne Marie. By this point Bill Mustos returned from sabbatical and had decided not to return to CTV.  He was interested in producing and wanted to work with Anne Marie as exec producer on this show.  So the four of us worked hard on a vision for an episodic-driven series, supported by Louise Clark at the network.

Next time… Part 2 of Mike McPhaden’s interview with Mark Ellis and Stephanie Morgenstern.