How did you educate yourselves about TV pilot craft and structure?

MORGENSTERN: Well, we’ve got a pretty substantial shelf of books by now: How To Write This, How to Fix That, How to Make Things Better.

ELLIS:  And we watched a lot of cop shows.

What did you watch?

ELLIS: We took in a wide spectrum, from Rescue Me, which is really character-rich, all the way to CSI. We also went back and watched the first season of Hill Street Blues. And all that was done as we were discovering what the nature and structure of our show would be — how episodic, how much serialized storytelling.  We probably landed closest, structurally, to Without A Trace, and yet I think we found our own thing as well.  Every show has the challenge, especially in the first season, of defining what it is, and I think it’s when the writing room got into the 2nd half of the season that we truly hit our stride.

MORGENSTERN: Speaking of drawing on the wisdom and experience of the people we work with, I just want to make sure we give credit to Tassie Cameron, our head writer. She really was a huge force in the writing room. We had constant challenge and support and wisdom from Tassie.

ELLIS: And working with Bill and Anne Marie as well. I mean, Bill’s been involved with lots of series. There’s a lot of savvy — creative savvy — that came from both of them as producers as well.  And from an outstanding writing room — Esta Spalding, Adam Barken, Tracey Forbes”

Let’s back up. Once you got that green light for the pilot, and this was really going to happen, were you peppered with notes to make it more affordable, or more practical to shoot?

ELLIS: No, but right from the beginning, our one-pager said, rather naively perhaps, that the show “should have the look of a CSI: Miami and all the pace of 24.”

MORGENSTERN: Which is easy to say on a one-pager” 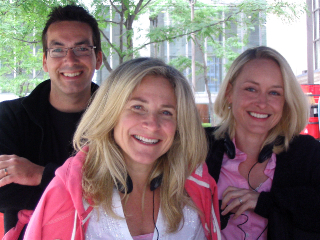 ELLIS:  But throughout the production of the pilot, nobody said “Make this cheaper,” and Anne Marie put all of her energy and resources and creativity into making sure that what we had written was represented beautifully and in such a polished way on the screen. In addition to really pushing for some interesting casting choices.

MORGENSTERN: She really had a drive for “no compromise”. Everything had to be up to that certain level of visual slickness and flash and style that everybody loves to watch.
But sometimes the circumstances you face in production will force you to make a more interesting choice. In the real ETF station they have a 360 degree firing range where you stand in the middle and the walls are covered in many layers of black tires that will absorb whatever kind of rounds you fire at them” which is realistic, but it’s not actually all that exciting.

So they were preparing to build us one of those when it turned out to be a lot cheaper and a lot more visually exciting to use an existing set as if the SRU had built themselves a mock up apartment.  The characters could actually enter and clear different rooms, targets would pop out of the ceiling and walls — we would never have thought of writing that, but the practicalities of shooting led us to it.

ELLIS: And that opened our minds to the kind of thinking you have to do on a series, which is “Okay, that’s reality, but is it good enough?”

Well, the buzz I’m hearing is that cops love your show.

ELLIS: One of the crew members pointed out to us statistically how many cops would be watching, and it’s in the tens of thousands and that blows us away. Of course, we’re not entirely tactically accurate, but what we’re hearing is that we’re getting the emotional stuff right, and that’s really what we were after.

Talk about the research that you’ve done.

MORGENSTERN: It started with a newspaper article about the [Union Station hostage taking] incident, which had the names of the people involved, including one man in particular, Barney McNeilly; he was the spokesperson.  He was recently retired, but he was a top negotiator, he was an instructor, and very well respected in that field, so we tracked him down through his website and asked if we might be able to have a little bit of his time. We spelled out to him the aspects of the union station incident that had intrigued us and I think he sensed from our questions that our intentions were not exploitative and not sensationalizing. So we met with him — he gave us a couple of hours — and based on that, the doors did start to open for us.

ELLIS:  He said, “Would you like to go down to the station and get a tour?” And he’s just so respected on the ETF that anything he asked for, he would get.

Is he still involved with the series?

ELLIS: He was involved in the development of the series and then passed the torch to Jimmy Bremner, who we spent a lot of time with while shooting the pilot last summer and who has been incredibly open about sharing his stories — he really became the inspiration for at least a couple of episodes.

Do you want to talk about the title a little bit? I heard it was a rough road finding one everyone liked.

ELLIS: Critical Incident was our first official title, but we got notes that it sounded a little too medical or a little too dry, and the show is emotional and not all that dry and procedural.

MORGENSTERN: There was a real hope that it could be a single word. And “Flashpoint” sums it up: it’s a dramatic turning point, it’s an ignition, there’s a sense of things bursting into flame. There were about a hundred others, but was the one that worked the best.

ELLIS: My favourite rejected title was Badgers & Doves.  Those are the names for bad guys and good guys among cops, but it would only work if it was a British series.

That is very British.

MORGENSTERN: And [our daughter] Lucy suggested Bad Guys Run Away!

ELLIS: Any other questions?

Yeah, how do I get Final Draft to unlock pages for a single act?

ELLIS: Sorry, Tassie made us switch over to Screenwriter.  But you know what? It’s good. I wouldn’t go back now.

Thanks, guys. Congrats on your show.