The setting was just crazy: a gorgeous inn/spa on the water’s edge in Niagara on the Lake with the best service, delicious food and fabulous accommodations. 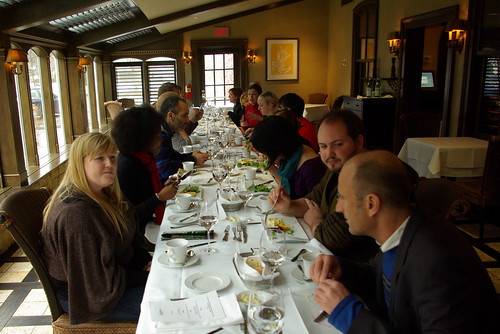 Then there were the people, each smarter and more accomplished than the next.

Have you ever spent a week doing nothing but creating?  Not for a deadline or a pay check but for the pure joy of the exercise?  Exhausting, exhilarating and total luxury.

The first two and a half days were spent coming up with ideas for multiplatform projects.  We used a wide range of brainstorming techniques.  We worked in small groups, but constantly changed partners so that it became a sort of complicated square dance with every possible crreative collaboration tried. 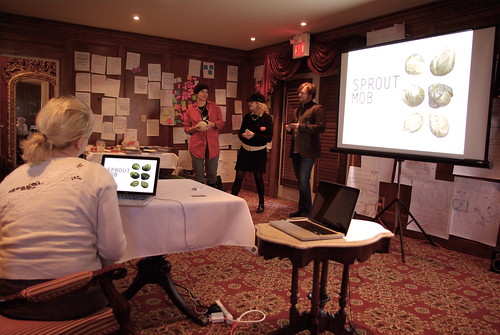 Each idea generated was documented on a sheet of paper (A4 or letter, depending on your national origin) and stuck it to the wall.  We must have had between 30 and 40 ideas up on the wall by the time the brainstorming phase came to its sad but glorious end.  Usually Frank and Mark aim to have 50 ideas by that point in the session, but their labs usually have 20 or more participants.  Ours was very small by comparison.

As we reached midday on Wednesday, it came time to commit to one project to develop over the final half of the week.  Again we would be working in teams, so the choice was not only about the project but also about whom to work with.  It was a very hard decision.

There were a lot of ideas I loved and every single one of the participants would have made an excellent collaborator.  There was no time to agonize over the choice.  I went with my instincts and chose the project that we’d been calling “Facebook game show.”  Tessa Sproule, CBC’s Executive in Charge of Digital Programming, Factual Entertainment had already chosen the same project.

Thus we entered into a new phase of the lab.  Each of the five teams would work on their projects for 2-3 hours.  Then we’d pitch them to Frank, Mark, the mentors and Anthea Foyer of the CFC.  Mark held a timer and strictly enforced a 5 minutes time limit for each pitch.  The panel would feed in with criticism that was constructive but definitely critical.

After the pitch, it was back to the drawing board for a few more hours intensive development and pitch prep before going back to them for another round.

At some point, we started working on visuals to go along with our presentation.  Designer Amy Leaman did an amazing job with ours and also contributed great ideas to the project.

Our final practice pitch was at 10 am on the morning of Friday the 13th of March.  Then Tessa and I walked the streets of Niagara on the Lake for a while, rehearsing. 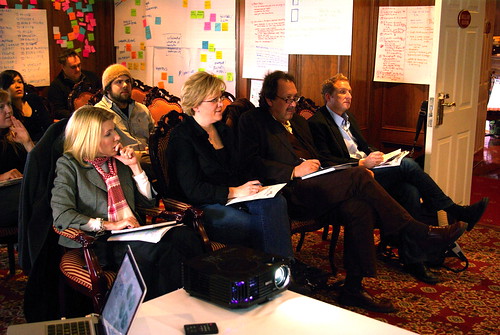 11 am was show time.  A panel of four judges had arrived from Toronto to hear the pitches, Patrick Crowe from Xenophile Media, Veronica Holmes from Bell and representing the Bell Fund, Cathy James from CBC and Slawko Klymkiw from the CFC.

One by one the five groups pitched. It was thrilling to see what these people who I’d come to love over the week had made in the 2 days we’d spent sort of apart. They were also each entirely different from each other.   The projects were amazing — viable, original and potentially lucrative.

Tessa and I were the last to pitch.  I’ve pitched plenty in my life, but this was probably the most finely tuned presentation I’ve made.

We were pretty enthusiastic about our project and confident that it was a great idea.  But the response from the panel was sort of underwhelming.  While they had oozed love for the four previous projects, no one said they loved ours.  They asked some hard questions, thought it would be prohibitively expensive and suggested that the only way to execute it might be through an international co-production.

After yet another delicious Oban Inn lunch, the panel stood up to award $5000 from the Bell Fund to one of the projects.  At first I didn’t even recognize the name of the project and then it took a minute to sink in.  The Bell Fund money went to our project, The Catalyst.

What a thrill.  It’s fantastic that Tessa and I get to do some more development work on The Catalyst.  We believe in this project and think it will make compelling entertainment.

But the whole week was the big prize.  What a great experience in every respect.  If you ever have the chance to attend a Crossover lab, jump at it.  It was definitely one of the highlights of my creative life.