Banff, Alberta.  The festival is gearing up around me, old friends reunite, little groups clustered around table talking intensely, pitches in the air, the ever presented Rockies in sharp relief against a blue blue sky.

Over breakfast I was reading an old New Yorker profile of David Milch by Mark Singer.  It was written in 2005 while Milch was shooting the second season of Deadwood.  I’ve fallen a little behind on my reading.

The article quotes the preacher’s eulogy for Wild Bill:

St Paul tells us from one spirit are we all baptized into one body whether we be Jew or Gentile, bond or free, and have all been made to drink into one spirit.  For the body is not one member but many.  He tells us: The eye cannot say unto the hand, I have no need of thee; nor again the head to the feet, I have no need of thee. Nay, much more those members of the body which seem to be more feeble… and those members of the body which we think of as less honorable-all necessary.  He says that there should be no schism in the body but that the members should have the same care one to another.  And whether one member suffer all the members suffer with it.

Which is Milch’s way of saying that, though a lawless existence at the edge of the frontier has its attractions, collective survival requires human being to learn to function interdependently, and in that way communities become single organisms.

Imagine going into the network and pitching that as your series premise.

But it is a profound and interesting thought and truly relevant as the festival begins here.

For the first time, the Banff Television Festival and NextMedia are one festival combining TV and interactive/digital.  With changes in the Canadian funding formulas we are beginning to think of these two separate industries as one.  To Milch’s point, this is the way to collective survival.

TV is mature.  The pathways to development, production, distribution, financing and profiting are clear.  And as you can’t help but notice as you walk through the Banff Springs’ lobby, there is an elaborate infrastructure in place and many many highly skilled and experienced people. 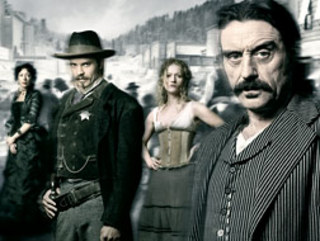 Digital, not so much.  Funding is just beginning to trickle in and remains tricky.  No one really knows how to make a buck.  Every project takes its own route to the marketplace.  There are plenty of familiar faces representing the developing interactive industry, but their bodies of work are counted in projects and years, not decades.

People often call the whole digital space the wild west making Milch’s point all the more poignant.  I have a very collegial and collaborative relationship with many people working in the digital space.  We know that the only way we can build this industry is by collaborating, sharing information, working cooperatively; working together.

As digital and television merge, we have the opportunity to make profound changes to the evolving industry.  Ultimately the industry is a single organism.  And we are diverse parts with different needs, agendas and points of view.  Writers see it one way, producers another.  Distributors, actors, editors, directors, broadcaster – there are a lot of different stakeholders here and everyone legitimately wants what they want.

There is no doubt that there is gold out here in Deadwood.  And yes, there will be blood shed and a whole lot of cussing.  But it is a place of great excitement and creative satisfaction.   And if we are to profit and create in this space, we are going to have to think of ourselves as one organism, the success of which depends on the health and well-being of all the parts.