I had the pleasure of spending the afternoon with Bruno Masi, one of two creators of The Zone, the brilliant web-documentary on Chernobyl 25 years after the disaster.

Bruno gave a fabulous presentation on the project, the making of it and the realities of being a transmedia creator, which sometimes has its share of frustrations.

One of the frustrations in the case of The Zone is how hard it is to find the link to the English version of the web doc.  And as Bruno says, the URL is ugly.  But you don’t have to look at the ugly URL, just click here and begin your exploration.

The Zone transmedia project is made up of several elements.  At its heart is the web doc.  The other elements are

LA ZONE (trailer) / Tchernobyl
Bruno’s presentation was the first of three Transmedia Storytelling Lectures that will be taking place at York over the next few months.  All the presentations will be free and you are welcome to come to them.  I will post information about the next one here because Bruno’s presentation was wonderful and I am sorry you missed it!
Jill Ruby Skye P.I. 1 Comment Permalink

It is launch day. 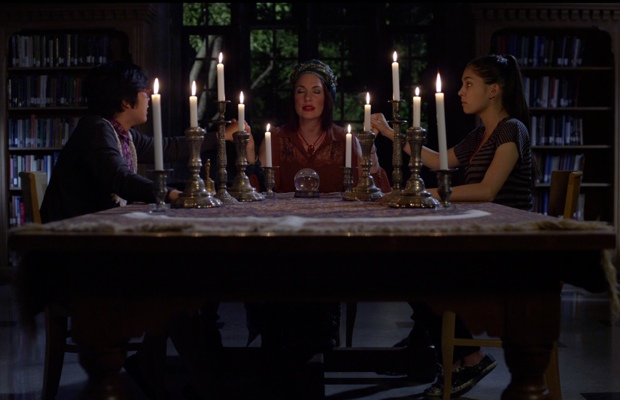 It is now more than two years since we launched the first season of Independent Production Fund who have supported this project from the beginning and to the Ontario Media Development Corporation which has many awesome and amazing programs that have helped tremendously.

Even with the financing which surely makes Ruby Skye P.I. one of the best funded independent original web series around, we still could not have made the series without the contributions of many wonderful individuals and organizations:

We are getting very close to launching Ruby Skye P.I.: The Haunted Library and things seem to be getting done bit by bit.

It is a massive project in terms of the number of elements I dreamed up to include and I have been panicky for months, certain I will never get all the pieces made. Head down, working from morning till night, with a ton of other wonderful people helping out.

We shot an hour’s worth of original story which we’ll roll in nine episodes. We also have a ton of extra-content video, which will allow us to release at least a video a week between now and April.

We have four web sites. RubySkyePI.com is all redesigned and we’ve had a tremendous team of transmedia volunteers preparing content to roll out in the coming weeks. ODearyLibrary.com is the website of the fictional library. We’ve filled it with a combination of original, user generated and repurposed content. It looks pretty amazing if I do say so myself. ODearyPuzzles.com is Ava O’Deary’s puzzle site. Solve a puzzle on it and it will reward you with a link to a video. We’re still tinkering with the coding of the puzzles, but the site looks beautiful and there are lots of puzzles to entertain you.

And there’s another web site, but that one isn’t ready for you yet.

Then there are our four Tumblrs. Hailey’s, Diana’s and one that is the home of our fictional band, The Mint Chip Girls.  Each of these Tumblrs gives you a little insight in the personalities of our characters.  The last tumblr is for the series; Ruby Skye P.I..
We also have a fundraising campaign for Because I Am A Girl. In the story, Hailey is raising money for them and when Diana finds out she can win tickets to The Mint Chip Girls concert, she starts raising money too. We love the work Plan Canada is doing for with the Because I Am A Girl initiative and so we decided to raise some money for them in real life. We’ve set up Hailey’s fundraising page, so you can make a donation. We’ve also produced a couple of fundraising videos and will have a weekly column about Because I Am A Girl on the Ruby Skye P.I. web site.

Ruby Skye PI: Because I Am A Girl Fundraising Video

There’s more to the project, but I’ll get to it another day.

The amazing Derek Ma has been doing lots of graphic work for the many many many sites that are part of the storyworld we’ve created for Ruby Skye P.I.: The Haunted Library.

He created logos for O’Deary Library, O’Deary Puzzles and The Mint Chip Girls and then built ads for each site that could be displayed on all the other sites.

He also made me this cheat sheet — which I love — Ruby Skye PI colour guide to keep track of colours for the sites.

Me, talking Ruby, on the Limited Release Podcast.

The eponymous library of Ruby Skye P.I.: The Haunted Library is The O’Deary Library,

It is played with the appropriate levels of romance, spookiness and mystery by University of Toronto’s Emmanuel Library.

We’ve just settled on a logo for it created by the lovely Derek Ma.

A couple of years ago at SXSW I met a woman named Haley Moore. I knew her virtually from Twitter and the Transmedia Talk podcast, but we talked to each other for the first time at SXSW and significantly, exchanged business cards.

Mine was a card. Her’s was several cards in a little sleeve. Each of the little colorful cards inside — some round, some rectangular — was a thinf of intriguing beauty. One include the words, in large letter, “I MAKE THINGS” and in slightly smaller lettering below, “you can tell a story”.

I love telling stories. And I immediately wanted Haley to make me stuff that I could use to tell stories.

Haley calls the things she makes “story artifacts.” I love that pair of words together.

Haley’s cards sat on a shelf in my office for more than a year, inspiring me. So it’s sort of strange that when we first started working on The Haunted Library Haley’s name didn’t immediately pop into mind as the person to build the clues we needed.

But when we found ourselves needing to remake the clues for reshoots, I finally thought of her.

I can’t show you her finished product. For that you’ll have to wait until October. But I will show you the design and an early rendering.

What a pleasure it is to be able to work with someone whose work you have admired.

More and more pieces of the extended story world for The Haunted Library are coming together. I’m getting very excited!

I’m a well known optimist… or is it self-delusion? I thought that things would calm down a little during production and that during our long nights shooting I would be at my computer blogging and tweeting and updating the world on the amazing progress of Ruby Skye P.I.: The Haunted Library.

And because I’m the type who never lets reality get in the way of belief, I lugged my computer to set every day, set up a desk in the production office and never once turned it on during the 10 day shoot.  At least, not during the shoot hours.

We shot at the amazing Emmanuel Library which is on the Victoria College campus of the University of Toronto — an incredibly beautiful location.  The library is open during the days, so we took it over every evening at 5:30 and wrapped out of the building at 6:30 the next morning.  I’d sleep for a few hours and as soon as I opened my eyes, I would be on the computer… answering email, fiddling with the script and doing God knows what that wasn’t blogging.

Luckily, Kelly Harms was not wasting time while I was filling up my hours with what, I don’t know.  He was making an unbelievable film.  I beg of you, do not tell him that Ruby Skye P.I. is a web series.  He seems to be functioning under the belief that it is a high budget feature.  OMG, talk about gorgeous.  You will not believe it when you see it.

We shot on the Red, which has its pros and cons.  Pro: absolutely exquisite and a quality that will look amazing on any screen anywhere.  Cons: there are costs associated in terms of lighting gear, time and post production workflow.  Any time I feel the slightest doubt about whether the Red was worth it, I just glance at the footage and all doubts fade.

We wrapped the 10 day shoot at dawn on Saturday June 1.  Post-production proceeds apace.  Unfortunately, I’m not there.  The second we wrapped principal photography, I got on a plane to PEI to teach at the PEI Screenwriting Bootcamp.  I was back in Toronto for 36 hours before I headed here to Banff for the World Media Festival.